If we walk in the light as he is in the light, we have fellowship with one another, and the blood of Jesus his Son cleanses us from all sin. -1 John 1:7 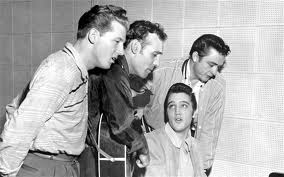 After that meteoric rise to the top, Johnny Cash was well on his way. Over the next ten years, he would travel with Jerry Lee, Elvis, Carl Perkins and the Roy Orbison, I’ve seen some really cool shows but I’m pretty sure if I was at one of those shows I’d be just as giddy and swooning as the teenage girls. Just being transparent. In those years Johnny would record the ironic Get Rhythm, Give my Love to Rose, Big River, I Got Stripes and Ring of Fire. Over these same ten years, Johnny also recorded two gospel albums.

Even while he recorded these gospel albums, Johnny’s life began spiraling out of control. He had long ago abandoned that whole I Walk the Line principle and his life on the road was as sad as it is predictable. The pills in which he had found such comfort had taken control over his life. The son of a so-called “dry-drunk”, Johnny, just like his father before him he found himself in a place of insanity. He pushed away the ones he loved. Vivian divorced him. His days were spent wrecking cars instead of writing songs and his proverbial salad days had come to an end.

Rumors of jail time had circled the life of Johnny since his early days and he made these rumors a reality in 1965 when he was arrested for possession of narcotics across international lines. The pills to numb his pain only created chaos around him. No matter what we are filling the void with, be it accomplishment, career, family, friends, sex or drugs. We all know that place. His life was more empty and miserable every day. Still, Johnny had not hit bottom.

Johnny Cash is the only person ever to be sued by the great state of California. His reckless driving in a National Preserve started a massive forest fire that resulted in the number of California Condors in the refuge going from 53 to 9. If you want to enrage Californians, set a forest fire and threaten a Condor. The state got $125,000 out of the defiant Johnny Cash. In court, he stood and made no defense. He mocked the judge by repeatedly calling the Condors “buzzards”. The combination of financial penalty and public embarrassment would have been devastating to anybody in his right mind, still he had yet to hit bottom.

God in the Dark

Johnny’s decade of hard living led him to a place of utter despair. He contemplated and even attempted suicide. It was in October of 1967 when he crawled into Nickajack cave in Tennessee, planning on dying alone in the dark. It was in this darkness that God found Johnny Cash. He said:

The absolute lack of light was appropriate, for at that moment I was as far from God as I have ever been. My separation from him, the deepest and most ravaging  of the various kinds of loneliness I’d felt over the years, seemed finally complete. I wasn’t. I thought I’d left him, but he hadn’t left me.[1]

Suddenly Johnny knew Christ was there with him. For the first time, comprehended the simple idea that so often eludes us. He said:

From this moment on, Johnny’s life was totally different. Everything had changed. He found sobriety. He relapsed. He got clean. He relapsed. His story is similar to many in this room. Eventually, after sticking with recovery, Cash was clean and sober. The next year he married June Carter, whose voice had somehow wooed him from the first day he heard her singing on a record.

If you have seen the movie or even if you know his story, it is so easy to stop here. We all want a happy, neat ending that has our hero riding off into the sunset. God, however, in his grace, will always give us reasons and opportunities to be in need. Johnny Cash never outgrew this blessing.

There is an odd story about Cash being waylaid by a pet ostrich (When you’re rich you can afford these things) in the early 80’s. He was nearly disemboweled by the angry bird and immediately hospitalized. During this time, he became addicted once again to painkillers. His relapse left him in a state of constant paranoia and panic and it became quickly apparent that he was once again in the all-too familiar throes of addiction.

The Lord brought him once again out of that state of insanity. He stayed close by. He brought him through the process of recovery once again. God was faithful to the end with Johnny Cash.

The good news for us is that he is the same in our case. God is faithful. God is here. God is for us. We know this because we have an Older Brother who has given us his perfect righteousness and holiness as if we had never sinned nor been sinners. In familiar terms, Jesus himself has “walked the line” for us. He is for us.

The Lord is present in the darkest depths of our hearts speaking to us. His message is simple. He will keep us to the end. All we need to do is trust.

One thought on “The Man in Black and the God of the Light: Johnny Cash, Addiction & Jesus”