Jesus- Man, Freedom Fighter and God For Us 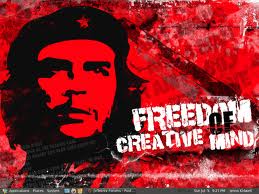 Who can’t love a freedom fighter?

I mean, seriously, it is almost irrelevant to us how the freedom fighter achieves his ends, we just love to see somebody fighting to the end for the liberty of captives. We love Gandhi because of his “passive resistance” strategies (Bonhoeffer, in particular, loved the writings of Gandhi and always wanted to meet with him) or Che Guevara’s guerrilla warfaring, we just love somebody who is all about releasing some captives.

Last night, I walked out into the living room and my roommate was watching a movie with his girlfriend. David is a bold guy because the two lovebirds were watching Braveheart. In fact, this act of bravery may qualify him as one of these freedom fighters. It was all I could do to leave the two alone. I felt William Wallace calling out to me to break free from the work waiting for me at my desk.

Do you remember Robert the Bruce standing there with his dad, who is dying of leprosy or something, and passionately expressing his support for the rebel Wallace? Robert’s dad, old and cynical, offers a bit of rain for the parade. 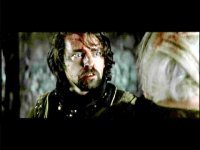 You admire him because he has courage. So does a dog.

Wow, thanks for the support, old man. I guess everybody except Robert the Bruce’s dad can love a freedom fighter.

Have you ever thought of Jesus like a freedom fighter? He was, after all. Luke’s telling of the Jesus story records a scene at the very beginning of his ministry that stands out. Jesus has been out doing a few miracles here and there, gaining a bit of a reputation among the people. Now he is back home in Nazareth. On Saturday, Jesus goes to the Synagogue, as any good son of Abraham would, and he stands up to do a reading.

The Spirit of the Lord is upon me,

because he has anointed me

to proclaim good news to the poor.

He has sent me to proclaim liberty to the captives

and recovery of sight to the blind,

to set at liberty those who are oppressed,

To proclaim the year of the Lord’s favor.

I know it sounds strange for a carpenter’s son to stand up in the middle of a service and read from the Old Testament, but this was sort of the norm at the time. Folks would stand up and read from the scrolls of the book and the rabbis would teach. The fact that Jesus read in the Synagogue was not the surprising part- it was his little sermon.

Today this Scripture has been fulfilled in your hearing.

Now that is a jarring statement.

Jesus came to us as God-in-the-flesh with a very simple task. He came to free us from our oppressors. Now who could possibly turn that down? The poor finally have good news! The captives are about to be freed! The blind will see! The oppressed will be set free! Wow, can you feel the exhilaration that would come out of that agenda? Who could argue with that? If a presidential candidate came with a three point-plan to preach good news to the poor, set the captives free and proclaim the year of the Lord’s favor, would it really matter if he was a democrat or a republican? Who can’t love a freedom fighter?

At the end of the day, our enemy is not external. Somebody else is not screwing up our life. The devil is not making us turn on the Lord. The old saying is true. We have met the enemy and he is us.

We have impoverished ourselves by confusing stuff for riches and deeming relationship with God and man dispensable. We have taken ourselves captive by taking what we want when we want it instead of waiting on the Lord. We have blinded ourselves to our loving Father who reveals himself in every sunrise and sunset. We are our own worst enemy.

He comes with an announcement that God is for us.

That is what it means for him to “proclaim the year of the Lord’s favor”- he accepts us. He loves us. He wants us. He is for us.

What will you do with Jesus’ little sermon today?

2 responses to “Jesus- Man, Freedom Fighter and God For Us”