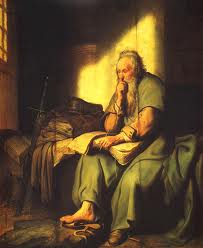 One of the sweetest little books in the bible is the Apostle Paul’s letter to the church at Philippi. This is written by a man who is running out of words for a community of people he has loved since the day they came together. This is a church that has provided Paul with everything from confidence cash. They have stuck by him and supported him even when he went to prison. They are the ones who have stuck by him through thick and through thin. There was something special about these people Paul wanted to see grow and blossom to fullness.

They were a happy bunch- well, as happy as a broken, prideful, fearful and striving people can be, in any case.

And so, as Paul finishes a letter written to a sincere, although broken band of followers, he gives them this little command that I saw on every Christian t-shirt in my childhood. Rejoice in the Lord always. Again I say rejoice.

Oh, and one more word about Paul, he was in prison when he wrote those little words. He had no idea what the future would bring. He had no guarantee that he would ever see freedom again in this life. And what about his past? Can you imagine writing these words with blood on you hands? I tend to forget that Paul must have struggled with shame just as much as the rest of us.

I mean, Paul is the guy who was getting a reputation as a cold-blooded judge of the worst sort. In his attempts to serve God he had murdered dozens of people made in his image. In his search for his own significance he had trivialized the lives of his own brothers and sisters to the point that he could callously approve the lynching of the people made in God’s image. We have all made mistakes and there are things that each and every one of us would take back if we could- words we said in anger; addictions that left the ones we love feeling the deep, deep sting of betrayal; decisions that cost us our careers and families- but think about Paul for a second. He had to deal with the memory of his part in the murder of his own brothers and sisters. Paul was an epic sinner.

So when this guy tells us to be glad, we stand up and take notice.

And when he tells us to be joyful all the time, we have met a challenge many of us have never coming our way.

Because the Christian life is about bemoaning our sin, right? It is about feeling sorry for what we have done and hoping that God, in his wrath, spares our lives because of Jesus, right? It is about turning from those things we wanted to do so that we can do the things God has called us to do, right? The way of Christ is the way of the death (it would have to be if it was also the way of resurrection!) of our happiness, right?

Well, yes and no.

Yes, we do bemoan our sin- but that is only the beginning. Yes, we are sorry for hurting others and slapping our Maker clean in the face- but that is not the half of it. Yes, following Jesus entails leaving the way we were going- but that is a start. Yes, the way of Christ is the way of death to happiness the way we want it- but only then do we realize that we are ill-equipped to set out a plan for our own happiness. Look at G.K. Chesterton’s explanation:

It is really a natural trend or lapse into taking one’s self gravely, because it is the easiest thing to do. It is much easier to write a good Times leading article than a good joke in Punch. For solemnity flows out of men naturally, but laughter is a leap. It is easy to be heavy; hard to be light. Satan fell by force of gravity.

It is no work of the Spirit to live life in a state of misery and dejection. He may bring us through those times, it is true- and they may last much longer than we hoped they would- but he intends to take our burden from us. He intends to give us laughter, levity and joy even in the most trying of circumstances. Paul knew this happiness even with a scarred conscience as he sat in prison. This joy is for real.

So the moment meets us now and we are pressed into a decision. Do we cower in fear, ungratefully ruing our existence and those around us, or do we take these words to heart, singing and dancing in the freedom Christ has given us?

What could be a better reason for gladness than to know that, wherever you are at today, God is for you?