Ok, so now that we have established that we have every bit as much (if not more) capacity to be wrong as our fathers before us, let us get into the questions surrounding the discussion. The first issue is the nature of hell.

If Jesus descended into hell, what did he descend into? Was it a fiery abyss akin to Daniel’s lion’s den? Did Jesus go to Dante’s inferno and suffer the white-hot torture of Satan? Or is hell more like a holding-place for the dead- like the dilapidated inter-world office in which you find yourself in

the middle of a Tim Burton movie? Or is hell more like that place we fall into when the hand of God drops us, like a spider into his burning wrath, such as we find in Jonathan Edwards?[1] Each of these versions of hell carry with them their own difficulties, particularly when we imagine Jesus descending into them.

Could Jesus be tortured by Satan?[2] Is there an intermediary time in-between the time of now and eternity? And what does it look like for the Father to punish his own Son in the same way that Edwards describes? These are not thoughts that are easy to take to bed and rest with- they haunt us, that is, if we let them.

If I can, allow me to offer as simple an explanation of hell as I know. I trust this view has been informed by the words of Jesus as well as the words of our fathers in the faith. If we boil it down to impossible simplicity, the thing about heaven is that we are in; and the thing about hell is we are out. Heaven is the fullness of God’s presence and pleasure; hell is the active absence of God’s goodness. Hell is the place of banishment, exclusion, wandering and isolation.

To be clear, we have no idea what this absence is, really. In that place you would be hard-pressed to even pray with David: If I ascend into heaven, you are there! If I make my bed in Sheol, you are there![3] We know a world where everything moves and dances to the rhythm of God’s presence. Even on the darkest day in the most godless and evil place, God is with us. The troubling reality, however, is that there is a coming finality to our world and Jesus says that at the end of it all, some will be in and some will be out.

Think about when Jesus uses the term “outer darkness” in Matthew’s gospel account. He used it three times. Once in the story of Jesus’ healing of a Gentile soldier’s son, when he told his disciples that one day the “sons of the kingdom”- that is, the Israelites who ignored and rejected his coming- will be thrown out and the believing Gentiles will be brought into the presence of God in their place.

Jesus speaks another time of a prince’s wedding fest when nobody showed up. The servants went into the highways and hedges and “compelled”- I love that word- the homeless to dine and celebrate with the king. One dude apparently did not get the memo that it would be a good idea to dress up to this affair (imagine somebody who dishonors the host of a party he was not even originally invited to!), and he is cast out into this same “outer darkness.” Chilling.

Then the third time, Jesus told a story about the coming day when the Father will separate the sheep from the goats (the strong, willful ones from the stupid, simple, trusting ones). The sheep, he brings in and the goats are cast out into this same “outer darkness.” Final judgment gets no more final than that.

So now picture Jesus enduring that separation for us. He descends into hell. He goes to the place of full and complete abandonment from his Father. He is cut off. God actively abandoned his own Son, Jesus for us. He descended into hell for us. Jesus, as the writer of Hebrews wrote: suffered outside the gate for us.

Does this mean that hell is not as bad as it is cracked up to be? Not at all. It is worse. Think of all the tortures, murders, hardships, loss of family and even of life itself that men and women who loved God have gone through over the years. Think of your own deepest, darkest place. Can you imagine going through that time without the help of God, even though you did not see his hand in that moment?

We cannot know the horrors of hell, let alone expect to comprehend the plunge of God into Godlessness that we confess. We cannot fathom the depths of suffering that Jesus took on for us but we can be thankful, so very thankful, that we have this little phrase to pour over. Jesus descended into hell. 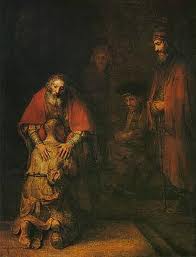 The Son of God descends to Godlessness for his enemies and in doing so, he makes us his friends, his brothers and his bride.

He descended into hell.

He is for you.

[1] By the way, Sinners in the Hands of an Angry God is one sermon out of a lifetime of sermons, most of which dealt with the love and glory of God?

[2] Lest we forget, this was C.S. Lewis’ perspective in Narnia– do you remember the White Witch torturing Aslan?

2 thoughts on “Jesus Descended into Hell…what is hell?”