Worm Theology and the Image of God

There is nothing so dangerous or necessary in the world as singing Isaac Watts’ coarse and abhorrent words would (Christ) devote his sacred head for such a worm as I? The confession that we are “worms” places us at the crux of our belief. Our very lives are on the line as the words come to our lips.

I remember being a kid and getting ready for our fishing trips. While ardent fly-fishermen may scoff, it is tradition on the West Coast to show up at a fishing trip with a coffee can full of worms (Scoff if you like, natives of Montana, even the river is headed toward the “Best Coast”).  Some of my fondest memories were digging in the dirt in hopes of finding the perfect bait for a small-mouth bass. But even as a 7-year-old boy, I had to admit that activities centered around worms were fairly uncivilized.

And so when I see Alas, and Did My Savior Bleed on the Sunday bulletin, I can only pray that we use the more civilized edition for the first verse, where the sacred head is devoted to “sinners” like me, not worms. Seriously, who wants to think of themselves as worms? Gross.

And there is a particular danger associated with what some more civilized theologians have dubbed “Worm Theology”. I’ve been reading a book by a philosopher named Erich Frohm lately and one of the few sentences that make sense to my little brain has stuck with me the last week or so. He wrote: self-humiliation and a self-negating ”conscience” are only one side of an hostility, the other side of which is contempt for and hatred against others.[1] And he has a pretty good point.

After all, are we as Christians any better at loving the world as, say any other religious contingent seeking to better society? I saw a statistic just the other day that pointed out that the greatest contingent of German activists who gave their lives to fight against Hitler’s Reich were Jehovah’s Witnesses. One of the basic tenets of their theology is that mankind can please God with their works. That would be the opposite of Watts’ (as well as David and Isaiah’s) designation of the worminess of humanity.

In all humility, we have to give credence to Gandhi when he famously rejected Christianity on the basis of Jesus’ followers’ unwillingness to live differently in the world.

And I think, at least in part, our failure to love our world has to do with our acceptance of our own worminess. There have been times in my own life, and it is a constant pull for me to find comfort in my frailty, my brokenness, and my own worminess. But again, I am missing the point when I excuse myself from obedience to Christ on the basis that I am a worm, and not a man!

Do you remember how Satan tempted Jesus in the wilderness by manipulating the word of God? He speaks in half-truths and twists the truth into a lie.

Acceptance of our worminess is only a half-truth.

Are You Worms or Men?

We were created with the image of God stamped on us, written into our DNA, spoken into our lifeless beings. We were created to hear the voice of God, to celebrate our life in him, to rule and reign with him, and to live life together with him. 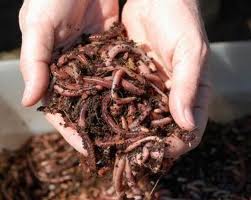 But we have accepted the half-truth that we are worms. We assume we are unloveable and therefore unloved. Each time we believe this, we prefer the word of Satan rather than the word of Jesus. His life, death, resurrection, ascension, mediation and promise of return testify to his view of us. He has plans for his broken humanity.

This is the best news for worms. God refuses to scrap his creation. He is not too civilized to play with worms, to call us back to our original nature, to transform us back into the women and men he created us to be. Our worminess is not the end. It is not the whole story.

Will we be bold enough to confess with David, with Isaiah, and with Watts? Or will we stubbornly refuse to agree with the mess we have made of ourselves?

The choice is ours.

8 responses to “Worm Theology and the Image of God”