For the first three years of her life, she had full reign of everything that was mine- with embarrassingly few exceptions.

When I decided that I was going to get a dog, I made my friends promise me that they would not let me become that guy who was always telling stories of his four-legged friend. I had seen so many perfectly sane people jump off the edge of reality when they became dog owners, and I did not want to become that guy. One friend referred to his furry friend as baby, and another attempted to claim his Jackterriers as dependents come tax day, which makes perfect sense when you spend any time with the insane little creatures.

And I started off on the right foot. No pet names for my pet. No overly emotional attachments. This dog was going to be raised right- she would know her boundaries. I don’t really remember when I lost my mind, but somewhere along the way, I stopped hearing myself call her baby. She could go anywhere but my bed- at least if I wasn’t looking. She had her run of the place. 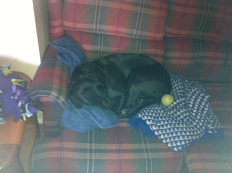 And for three years, Delia was as attached to me as I was to her. The only times she would have to go outside the house were for play and other necessities. She was two years old the first time she spent a night outside.

There I was, at my future mother and father-in-law’s house, trying to make a dazzling impression. I was ready to talk about sports, politics, faith, finances, and other topics which I am perennially unqualified to discuss, when Delia took center-stage. Convinced that there must be some mistake, she sat at the door whining for what seemed like an eternity. She belonged inside- not with these other dogs, in the Alabama midsummer night.

The next morning we found her holed up in the bed of my truck. The prospect of Delia accepting a new role in life seemed as hopeless as teaching her to speak French.

But over the last year, I have noticed a change coming over her. She has been reassigned from bachelor’s best friend to faithful family friend. Her days and nights are spent outside, and she seems just as happy as ever. Times have changed, and her role in life is different now from what it ever was, and yet she still jumps out of her skin when we get home from work. She still wags her tail with the fury of a hurricane when it is breakfast time, so I suppose she cannot be diagnosed with depression.

And I think about Delia’s life-transition in relation to my own. New city, new people, new climate, new circumstances, and I wonder if I am as content as Delia. Have I convinced myself that contentment is to take a backseat to ambition? Should the pursuit of happiness take a backseat to solving the societal problems of our day?

Don’t get me wrong, because Delia has an agenda. Those sad eyes piercing through the window are all a part of her politics. Her daily sprints toward the truck are her sometimes successful attempts to go somewhere in life. Those holes she digs on occasion are a sign of her restlessness, but she doesn’t seem to get carried away with her visions of how life ought to be.

It seems that we’re all out there trying to change the world, while Delia is happy with some love and some kibble. I think she is a better preacher than I could ever hope to be.

Reflections
rest, Sermons from my dog