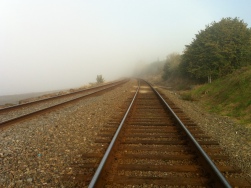 If the Son has set you free, you are free indeed.

Some things that Jesus said are, to put it mildly, insane. It’s hard to justify the wisdom of a spiritual leader, a rabbi, a paragon of virtue, and more generally, somebody who could be described as “having it all together,” when he runs around commanding his followers to eat his flesh and to drink his blood. Sometimes I have absolutely no idea why the disciples kept carrying on. Sometimes I have absolutely no idea why I carry on. But we all follow, those of us who do, with a bold, you could say foolish, belief that this teacher is more than a teacher. We follow because, in the words of St. Peter, he has the “words of life.”

That’s certainly not to say that those words are always comprehensible. Especially to those of us who live with only one foot inside of life.

As I was saying, some of the things Jesus said were, on their surface, insane. Somehow, I am convinced that he is not a liar, but there are days when I feel backed into a corner to choose whether he is a lunatic or the Lord. Perhaps there is a fourth option, like in those standardized tests I’ve always dreaded. I’ll pick b and c, please, thank you.

There are those starkly absurd things Jesus said, like the aforementioned apparent invitation to cannibalism, and there are the starkly offensive things he said. We may be disturbed and disgusted when he tells the crowd to feast on his body, but we are offended when he bookends this statement with, “unless…you will not enter the kingdom of heaven.” And so, apparently, this teacher of peace came to disturb the peace. Even when we get past his absurdity, we are left with his stark commands, which are every bit as unpalatable.

And then there is a third category of the strange teachings of Jesus. They are exemplified by his words on freedom. If the Son sets you free, you are free indeed. At first, this seems, at least, patently obvious and at worst, offensive to the intellect. These are the statements that I tend to skip over. Sure, put these slogans on a t-shirt or engrave them on a stone and sell them in a bookstore.

But it turns out that there is a curiously fascinating quality to this promise. In making this statement, not only is Jesus extending something invaluable to those who would take hold of his words, but he is also claiming to hold this power exclusively. It is as if he is saying, “you cannot be free unless you obtain your freedom from me; I alone possess the power to be free.”

Now he has our attention.